Explore the Major Types of Lying and How to Trigger Them? 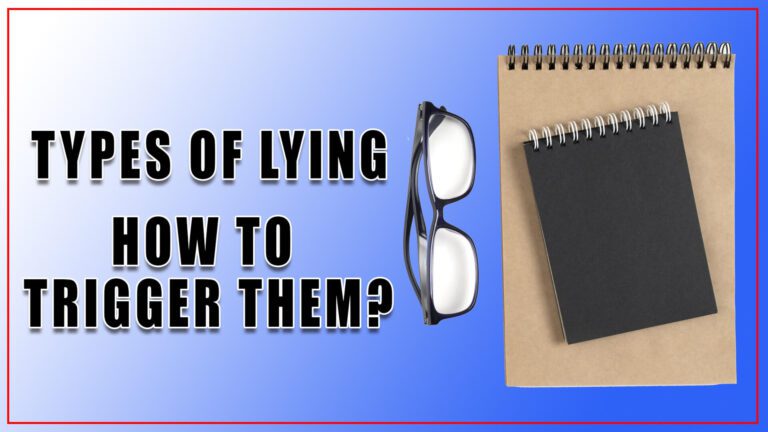 No doubt, nobody ever trusts a liar. However, lies can be classified based on many situations and factors such as the intention of the speaker, the consequence of lying, the context of the lie, the significance of the subject, and by nature of the situation. 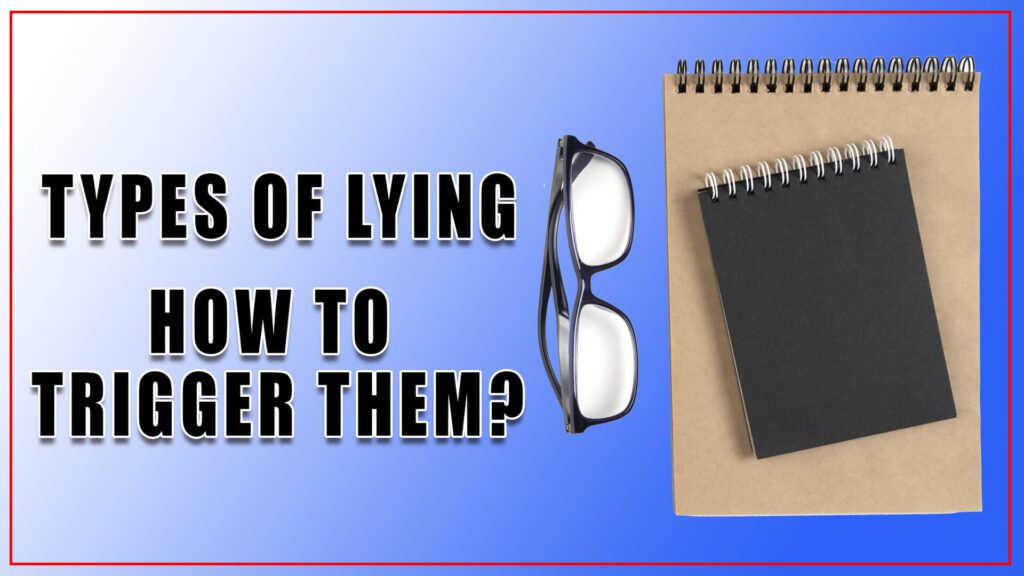 Probably the most beneficial way to classify a lie is by considering the speaker who tells a lie. Knowledge of liars and lies can save us from getting into the vast ocean of dishonesty as well as from big damages.

Which thing differentiate lies from the truth? What compels a liar to lie? For a better understanding of lies and their types, let’s have a look at the situation, nature, belief, and the role of memory in lying.

In many cases, it is usually not possible to determine if a memory failure occurs or not, or that person lies to cover his lie.

If a person falsely describes a condition or incident, it does not mean that person wants to misguide or hide the truth. A false statement is not considered a lie if that is not spoken to misguide a person.

If any information does not deliberately have any intention of misguiding someone or that person does not have any sensation that he is cheating someone, then it is not considered a lie. We should take account of the situation that leads to lying.

A liar often tries to create an impression that he was in a condition that leads him to lie or give false information, or tries to mislead other people. Lying by creating a deception is deadly, but a powerful tool to cover lies. Many people often use deception to create scenarios that do not exist.

A person admitted that “Sometimes, I want to be popular among people and want to be considered smart. So, I often joke around by telling people how smart I was and how I help others. It was not considered a lie, and nobody feels I was just pretending”.

Many people often misinterpret incidents and events, especially the actions and intentions behind their actions, and lead them to respond or act in the wrong way. The fact is that most people often interpret a situation, event, or action in a way that they want or that suits them.

People usually understand the events in the way that is desirable for them and get them to the results that engage them in desirable ways. Some situations do not mean a person is lying, rather than misunderstand an event or incident.

At the start, a liar may know he is lying and self-deceiving, but as time passes, he starts to believe in his lies and does not consider them lies anymore. Once a person starts believing in his lies, he may clear himself as trustworthy.

It is understandable that over time, they mixed both true events and their false beliefs in their subconscious mind and started believing in their validity. It may occur over time the real memory of the true event becomes a blur, and the person completely starts believing in a false statement.

Compulsive lying is a kind of lying in which a person tends to tell a lie due to low self-esteem or just for seeking attention. It may give him the desired attention from people, but once it starts, it becomes a habit and almost impossible to quit.

A compulsive liar mixes his lies with his truths that make them easy to believe. A compulsive liar accepted that “I started lying compulsively with the guy I live with, and the ridiculous part was that over time I started believing that they are the real truth”.

Why do kids lie?

Parents should understand it is quite a normal thing to catch your child lying. Usually, kids lie to their parents due to fear of punishment or being scolded when they do something wrong. However, there is no such study or search that exactly tells why kids lie more than others.

If you want to get a decisive answer on why a person lies, it is important to take a look at the person’s environment, culture, family, personal traits, and most importantly, emotional and mental health condition.

How can parents encourage truthfulness in children?

To encourage truthfulness and honesty in your children, it is important to often have open conservation on the benefits and importance of honesty and truth. Moreover, parents can create such a situation in which the kid is less compelling to lie and is more comfortable speaking the truth.

Start an open discussion with your kids about what are the consequences of being dishonest, and tell them your expectations from them about honesty.

Always enter into conversation calmly while confronting them. It will make your kid comfortable, to tell the truth rather than lying.

How Does the Person’s Attitude of Communication, Change with time?

With their comprehension of duplicity creating, it’s a good idea that a kid’s demeanor about the manners by which individuals lie and the outcomes of such lies will undoubtedly advance, as well.

Many examinations have shown us that kids as youthful as four accept that the goal to misdirect somebody is “awful” regardless. At this age, we anticipate their manners of thinking and good decisions to be higher contrast. This attitude drives them to denounce the demonstration of lying more than more established youngsters or grownups do.

Between the ages of ten and twelve, youngsters at this point don’t consider lying right. All things being equal, their decisions rely upon various variables, including goals and results. Numerous formative analysts have suggested that a youngster’s ability to make moral decisions continues through a progression of stages.

Recent research has found there is a point of failure showing kin will in general lie with comparable recurrence. Considering that, most basic interests, whether the outcomes would be comparable for kin who had been isolated from each other. The connection with the measure of lying between kin was as yet apparent.

All children, most adults, and young people sometimes lie in any situation in their life. However, if a kid starts lying frequently, or he persistently lies for a long period, the parent should be alert.

In such a situation, it is important to take a record of whether it is just a phase or a persistent problematic habit pattern. An expert can help you to determine the potential factors of lying and or it is just a temporary phase because of age.

1. How can you trigger the cause of kids lying at their growing ages?

Besides, it isn’t shocking that kids who lie regularly come from homes wherein guardians lie frequently. It may be the cause, when parents support disrupting the norms, like deceiving traffic police to escape a ticket or giving a phony pardon for being late.

2. How to check if someone frequently lies as a parent?

The primary step that you can take as a parent is to start discussing the importance of honesty and truth. However, if you do not succeed in addressing the habit of lying with tips and tricks, you should consult a pediatrician or a counseling therapist.